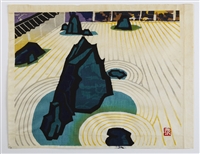 Iwao Akiyama, Taizo Minagawa, and Fumio Fujita rank amongst the most creative and tasteful Japanese print artists of the mid-late 20th century.

Akiyama (b. 1921) studied under modern print grandmaster Shiko Munakata (whose influence is immediately apparent). His works artfully combine modern colors, traditional rusticism and delightful whimsy. Here we're featuring his "Pheasants in the Snow," but Japanese Prints Plus has other of his works, as well.

Then there's Fumio Fujita (b. 1933). "Autumn Forest B," was created in 1977--the height of the disco era--but you'd never know it. Quiet, sophisticated and intelligent, the composition and color combinations are far more reminiscent of the late 1950's or early 1960's.

Visit Japanese Prints Plus to see our full gallery of "sosaku" and modern prints.

Posted at 10:37 AM in New on Japanese Prints Plus | Permalink